I am standing next to my mountain bike about to embark on one of the biggest adventures of my life. My back wheel is touching the Arctic ocean at almost 60 degrees North and it feels like I am about to ride into a scene from Lord of the Rings.

Next to me are eight other riders, a  group of adventure legends with experiences and accolades ranging from the Cape Epic to 7 summits and multiple Mount Everest summiteers. We share a common goal and it has brought us to this place. A place of pristine beauty, a place with raging rivers, active volcano’s, hot geysers exploding ten’s of meters into the air and steam gushing from the earth. This this the land of fire and ice. This is Iceland.

It started back in the winter of 2014, when Sean Disney and myself began researching and putting together a mountain bike expedition to traverse Iceland from the North to the South across 678km of wilderness terrain. It will form part of Onbike’s products to offer the seven giants of mountain biking. Over the course of the next year together with our Icelandic ground partner this trip started becoming a reality as we crafted the itinerary.

On 19th August 2015 it was finally time to take that once-a-year weather window when the snow have receded enough for us to be able to bike across the island’s  interior highlands. We rounded up our team in Reykjavik, assembled our bikes and went over the last minute expedition brief as we prepared for our transfer to Jökulsárgljúfur National Park, where our expedition will start the next day.

On the morning of our first of nine riding days, I picked up a combination of excitement and nervousness amongst the guys. The uncertainty of the un-known was ever present as this route had never before been cycled in its entirety by mountain bike. There was no turning back as we packed up camp and got ourselves ready to start the trip of a lifetime.

The first 100m or so was sticky as we started in thick sand from the beach. The next 20km was plain sailing as we warmed up the legs after all the travel on the only tar road on-route soon to be followed by a turn-off and onto the rough stuff.  The rest of day one’s  5 hour ride saw us bike various terrain of technical single track all alone with the Jökulsá River below until we turned away into a valley and reached camp at Elífsvötn, a mountain lake where we spent the night.

Over the course of the next 2 days we left all signs of civilisation behind as we rode to the highlands of Iceland across black plains of volcanic rock gaining 1500m in elevation. With the gain in altitude came a drop in temperature and increased wind speeds. The weather in Iceland can change rapidly, especially in the highlands.  Summer temperatures range between 5 – 8 degrees celsius with winter averaging – 2  to – 4 degrees celsius. Average temperatures in the highlands are normally 3 – 5 degrees colder due to the gained altitude and highland glaciers.

Our team soon settled into a pattern. Following a breakfast fit for kings we would break-up camp, pack the food water and repair supplies we needed for the day and load everything else into our support vehicle. A modified Nissan Patrol pulling a customised trailer, it had monster off road abilities and served as a camping rig, bike shop and restaurant, transported everything we needed between overnight stops. While it didn’t follow us all day, it was on hand to come to our resc

ue is case of an emergency . Our overnight accommodation was a combination of camping and remote mountain huts. The expedition was lead by Runar, our local Icelandic guide, Sean and myself, Heinrich. Between us we assisted and managed various rider levels and speeds to keep the group together as we crossed the wilderness environment. 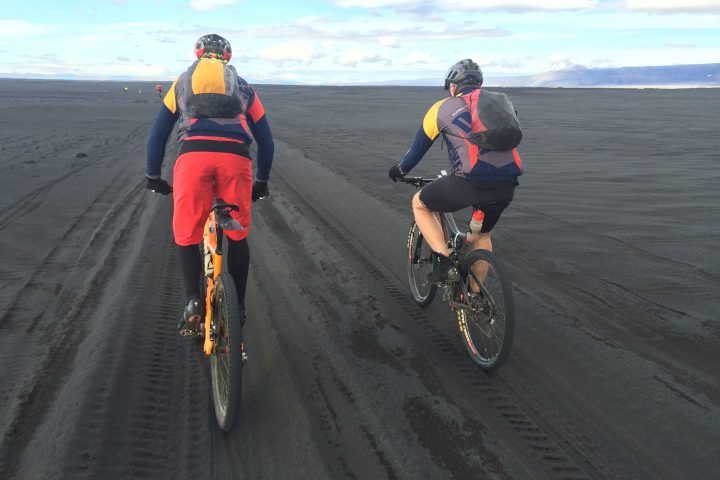 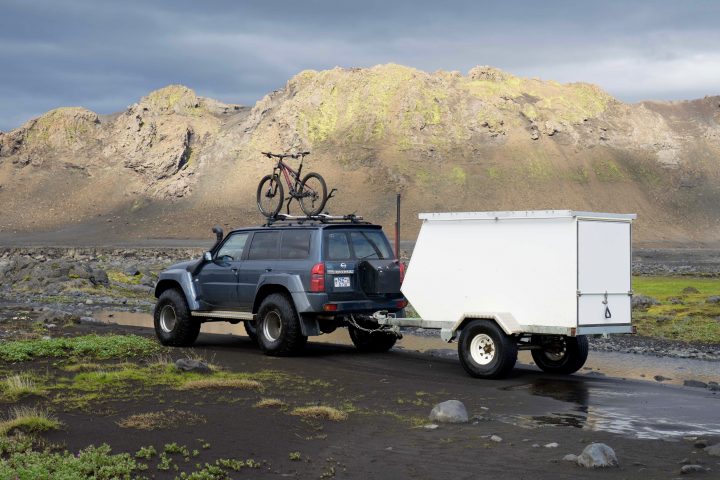 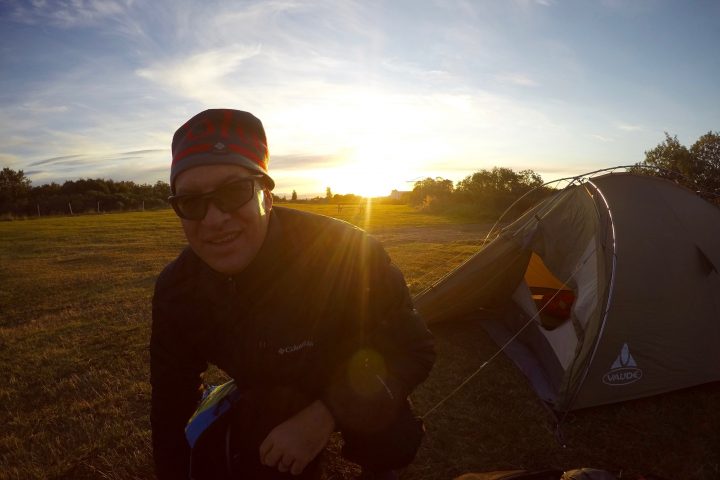 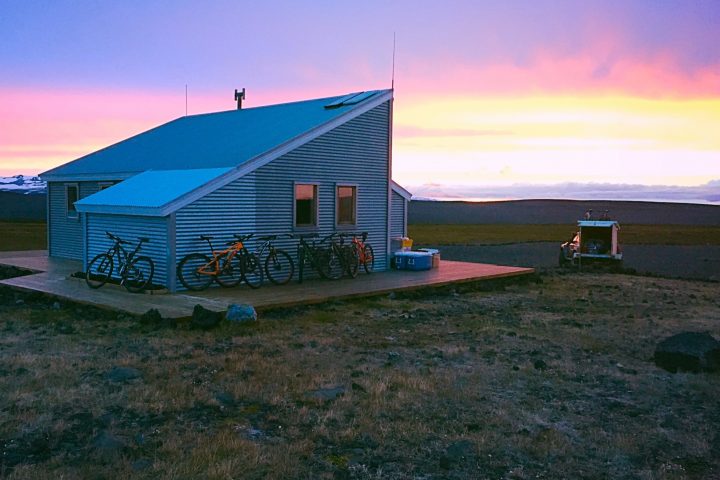 Everyone was riding cross country or marathon duel suspension mountain bikes fitted with 2.3 – 2.4mm tyres and 29-inch wheels. We had opted for maximum grip and pace in the soft stuff while maintaining the minimum rolling resistance we felt we needed considering the distance ahead.

A DAY OF EXTREMES

On day 4, shortly after entering the highlands, the quest became even more real. We kicked the day of with an early wade through a waist deep glacial river. With an evident step up in what the elements were going to bring in the days ahead, our bodies started to feel fatigued with almost 300km behind us, we faced the reality of what it’s going to take to successfully and safely finish this expedition. It was at this time that the group dynamics, as it so often does took a turn. The real experience in the Onbike expedition team started to show as the going got tougher. With deteriorating whether, windspeed of up to 60km per hour and periodic ice rain the team worked together, blocking out the discomforts, sharing snacks during our rest stops and focused on getting comfortable with being uncomfortable.

Three hours into what proved to be the longest day of the trip, we arrived at a vast lava field, the result of a recent crack in a volcano. We’d been warned that we might encounter it, but had no way of knowing the exact extremes until we got to it.  The lava field meant a four hour detour on a day that already held the biggest climbs and longest and coldest river crossings of our trip.

Its was during this day that we all paid our school fees, experiencing the distinct  characteristics of taking mountain bike touring to an expedition level. We cycled over terrain and surfaces which even the most experienced in the team have never even seen. From flood planes of compacted glacier silt, barren black lava field to crackling volcanic pumice rock that float past you on river streams.

We were now almost right in the geographical middle of Iceland. The bikes were giving us their best  and we were pushing every piece of equipment to the maximum. Nothing challenges a drive train, shocks or a pair of hubs like spray coating it in fine glacial silt, topped with volcanic crusher dust. We were not only managing our increasing fatigue, but at this stage realised we had to nurse our steeds to take us all the way.

This day was hard and painful and it pushed everyone in the team to their limits.  After nearly 13 hours in the saddle, our way was once again blocked – this  time by a raging river . Our support vehicle had to be called in to help us across, which meant a further delay while we waited for it to reach us. Riders and their bikes were taken across four at a time and we regrouped on the opposite bank for the final two-hour push to camp.

The evening of our longest, most gruelling day had us cycling well into the night. But as it often does, a day of lows ends on a high. As we cycled towards camp, after 17 hours and 109km of intense riding, a blood red moon rose and an array of blue and green Northern Lights began to dance in the night sky. Sharing this still gives me goosebumps! 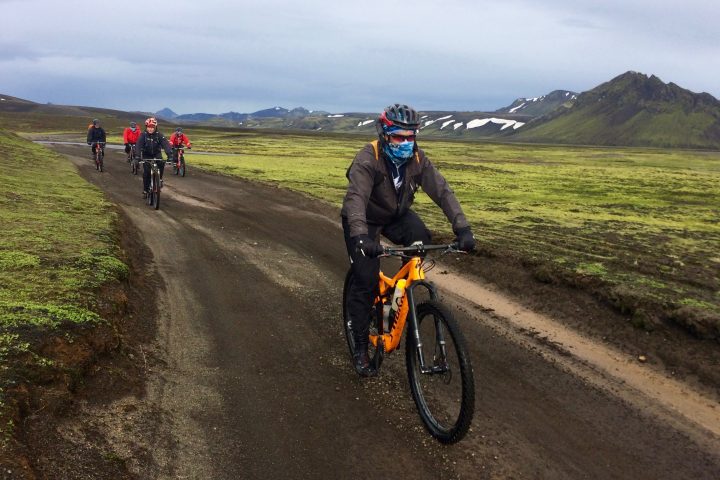 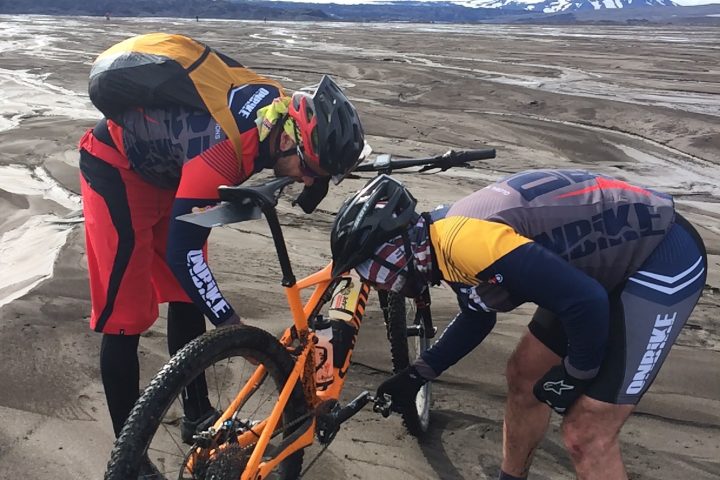 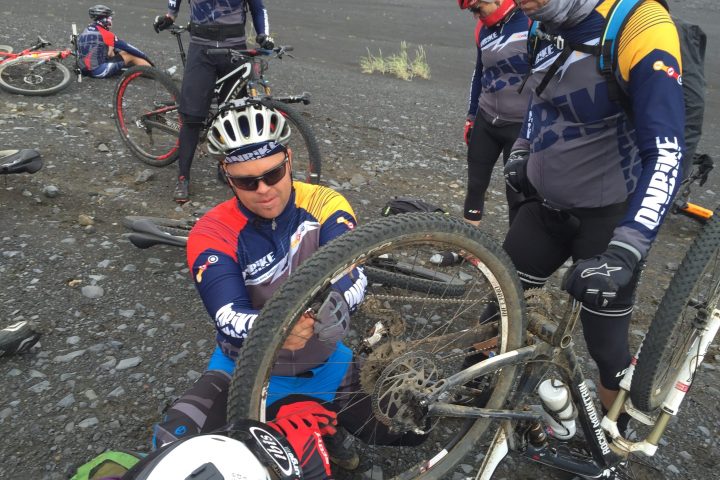 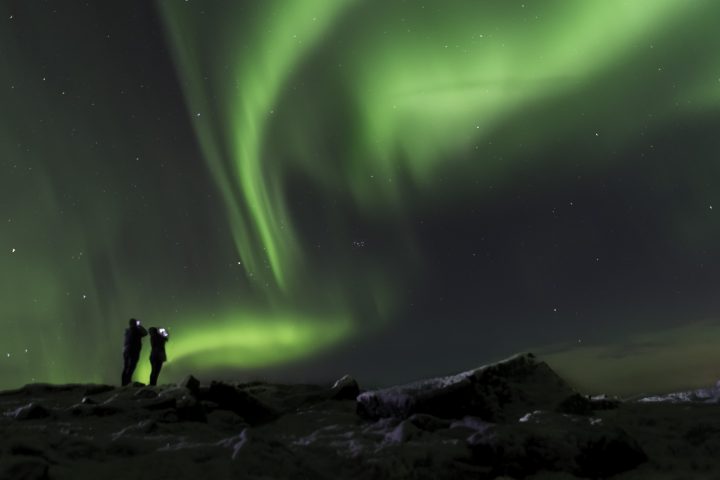 Over the next four days we were spoiled with multiple extended downhills over remote virgin single track and back-country gravel roads. And just when we thought our eyes had seen all the beauty there was to see, the mountains parted to reveal a valley of glacier rivers hugged by rolling banks of neon-green moss.

The last last day of our expedition is etched in my memory forever. After three hours in the saddle, we had a mean 5km of hike-a-bike to complete. I will never forget the moment we cleared the crest of that mountain and got our first glimpse of the Northern Atlantic – the goal and end point of our expedition. We made it!

Our final descent took us past a massive waterfall and down to the sea. We began our journey with our back wheels in the Arctic and we finished with our front wheels in the Northern Atlantic. Thrilled with our massive achievement, we cracked open a bottle of Icelandic vodka right there in the icy water and celebrated the end of what had been a truly epic journey. 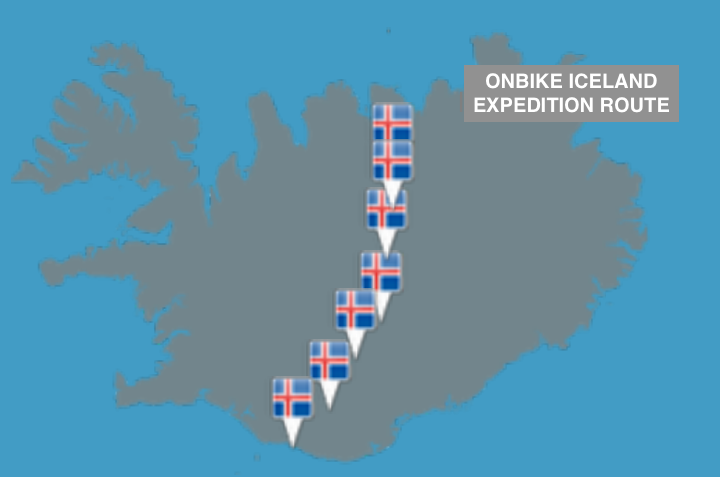 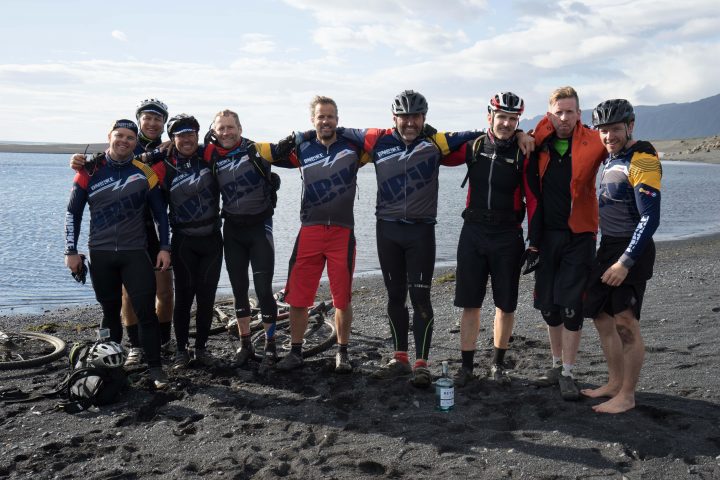 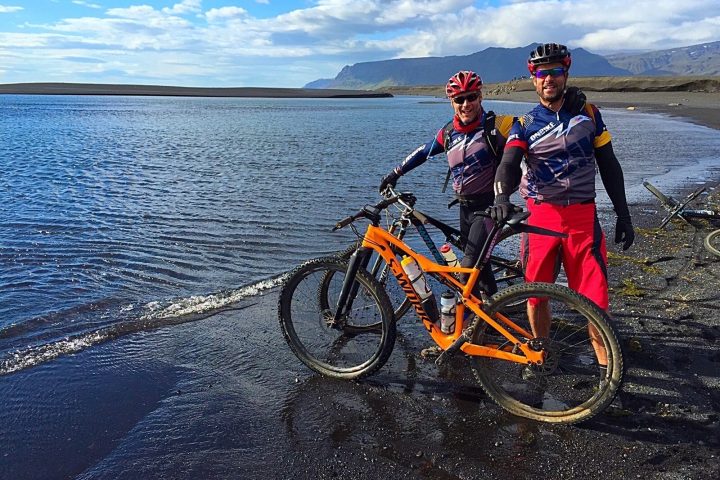 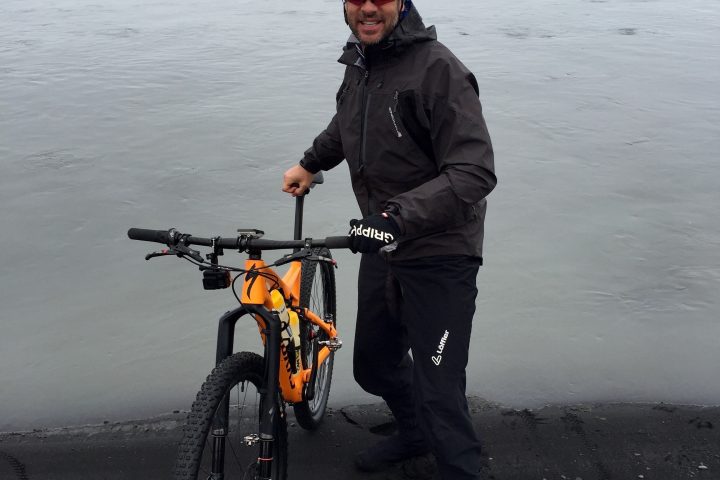